This pipeline performs several processing steps for the analysis of PET data on the cortical surface [Marcoux et al., 2018]:

This pipeline relies mainly on tools from FreeSurfer and PETPVC [Thomas et al., 2016].

You need to have performed the t1-freesurfer pipeline on your T1-weighted MR images.

If you only installed the core of Clinica, this pipeline needs the installation of FreeSurfer 6.0, SPM12, FSL 6.0 and PETPVC 1.2.4 (which depends on ITK 4) on your computer. You can find how to install these software packages on the third-party page.

The pipeline can be run with the following command line:

The arguments common to all Clinica pipelines are described in Interacting with clinica.

Do not hesitate to type clinica run pet-surface --help to see the full list of parameters.

If you are running pet-surface on macOS, we noticed that if the path to the CAPS is too long, the pipeline fails when the gtmseg command from FreeSurfer is executed. This generates crash files with gtmseg in the filename, for instance:

This is under investigation (see Issue #119 for details) and will be solved as soon as possible.

Results are stored in the following folder of the CAPS hierarchy: subjects/<participant_id>/<session_id>/pet/surface

The main output files are (where * stands for <participant_id>_<session_id>):

The full list of output files from the pet-surface pipeline can be found in the The ClinicA Processed Structure (CAPS) specifications.

FDG PET SUVR projected onto the cortical surface (left hemisphere) for (from left to right) a cognitively normal subject (CN), a patient with Alzheimer’s disease (AD), a patient with semantic variant primary progressive aphasia (svPPA) and a patient with logopenic variant primary progressive aphasia (lvPPA). The first row is the projection in the subject’s space. The second row is the same signal for each subject, but warped to FsAverage after smoothing with a 20 mm Gaussian kernel.

Describing this pipeline in your paper¶

These results have been obtained using the pet-surface pipeline of Clinica [Routier et al., 2021; Marcoux et al., 2018]. The subject’s PET image was registered to the T1-weighted MRI using spmregister (FreeSurfer) and intensity normalized using the [pons | pons and cerebellum] from the Pick atlas in MNI space as reference region (registration to MNI space was performed using SPM12). Partial volume correction was then performed using the iterative Yang algorithm implemented in PETPVC [Thomas et al., 2016] with regions obtained from gtmseg (FreeSurfer). Based on the subject’s white surface and cortical thickness, seven surfaces for each hemisphere were computed, ranging from 35% to 65% of the gray matter thickness. The partial volume corrected data were projected onto these meshes and the seven values were averaged, giving more weight to the vertices near the center of the cortex. Finally, the projected PET signal in the subject’s native space was spatially normalized to the standard space of FsAverage (FreeSurfer).

Easily access the papers cited on this page on Zotero.

Appendix I: Diagram of the pipeline execution¶ 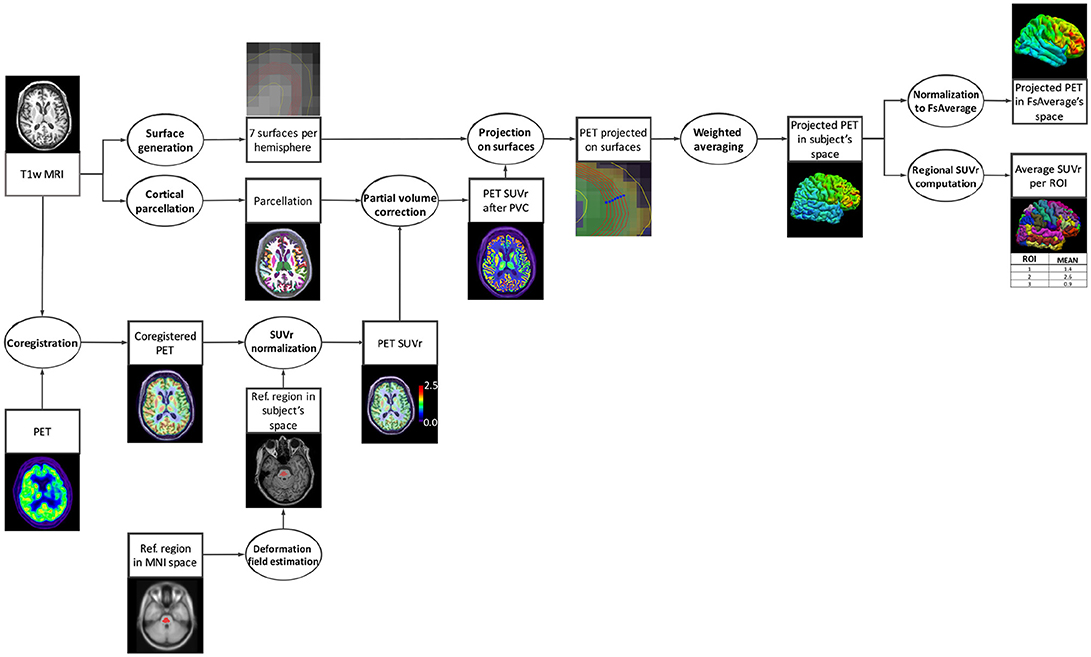 The subject's T1-weighted MRI is coregistered with the PET image and the PET image is intensity normalized using the average uptake in a reference region. In parallel, cortical surfaces and a parcellation are generated from the subject's T1-weighted MRI. The PET image, after partial volume correction performed using the parcellation, is robustly projected onto the cortical surface. Finally, regional mean uptake values are extracted from the projected PET data, and the projected PET signal in the subject's native space is spatially normalized to the standard space of FsAverage.

Appendix II: How to manipulate outputs¶

Outputs of pipeline are composed of two different types of file: surface files and MGH data that are to be overlaid onto a surface.

You can also open them in MATLAB, using SurfStat: mysurface = SurfStatReadSurf('/path/to/your/surface/file'). This will give you a structure with fields coord (for coordinates), a list of coordinates for each point of the mesh, and also the field tri (for triangle), a list of triplet for each triangle, each number representing the Nth vertex of the coord list. Below is an example to make things clearer (read with Matlab).

Data files wear the .mgh extension. They are composed of a single vector. These files contain a vector, where the value at the Nth position must be mapped into the Nth vertex of the coord list to be correctly represented. You can access them either in Matlab with the command:

(you will get a single row vector),

or in Python with the nibabel library:

mydata will then be a MGHImage, more information here. Keep in mind that if you want to manipulate the data vector within this object, you will need to transform it a bit. Indeed, if you do the following:

After the execution of the pipeline, you can check the outputs of a subject by running this command (subject moved into FsAverage):

But you can also visualize your subject cortical projection directly into his native space:

You will need to adjust the colormap using the Configure button in the left panel, just below the Overlay section.

You will obtain the following figure: